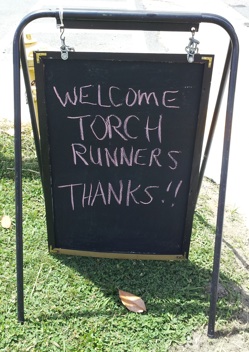 The Law Enforcement Torch Run for Special Olympics visited Colonial Beach for the first time on June 9, 2010. They've been back every year since then.

Every summer, law enforcement officials carry the "Flame of Hope" across the state of Virginia, leading to the Torch Run Final Leg and the lighting of the cauldron to officially open the Special Olympics Virginia Summer Games.

It wasn't until pretty recently that this event had been held in the Northern Neck region. Colonial Beach was named early on as one of the participating towns. The event was coordinated by Officer Robert Eves (Colonial Beach Police Department), Acting Chief Ranger Wayne Rose (National Park Service at George Washington's Birthplace), and Deputy Brian Davis (Westmoreland County Sheriff's Office.)

In addition to the race, there are fundraisers for the Olympics and donations are accepted. Official event T-shirts and hats are offered for sale and sometimes a Harley-Davidson Heritage Softail Classic motorcycle is raffled off.

More information can be found at www.torchrunva.com 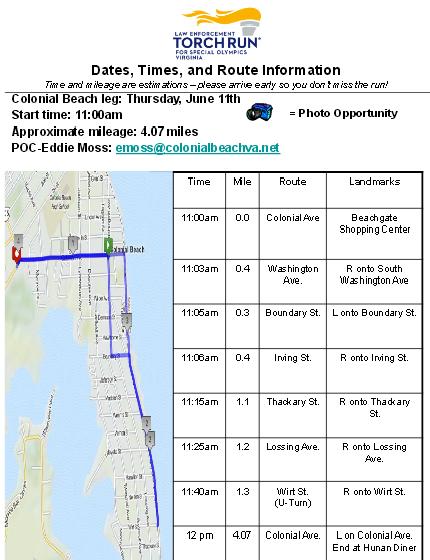 2012's Torch Run began at the Hunan Diner on the corner of Colonial and Washington. Video can be seen on our YouTube channel