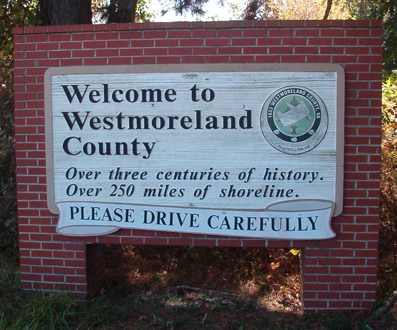 Stoplights: 1. It is located at the Beachgate. Back in the day, the stoplight used to be located further down at the intersection of Washington and Colonial Avenues.

Elevation: Ranges from the flood plain from the Potomac River to 20 feet

Newspaper: The Journal Press has a Colonial Beach Edition and The Westmoreland News had an office next door to the Museum in town.

Colonial Beach is a Golf Cart Town. It received this designation in 2004.

Being located quite close in proximity to the Navy Base at Dahlgren, this town gets to hear some of the testing conducted there. For the current testing schedule, see this website: http://www.nswc.navy.mil/RANGE/

Here's one of my favorite Colonial Beach, Virginia Facts: Westmoreland County is one of just two counties in the entire United States to be the birthplace of TWO U.S. Presidents! They are George Washington and James Monroe. The other county to be the home of two U.S. Presidents' birthplaces is Charles City County in Virginia where William Henry Harrison and John Tyler were born.

President Madison was born not far away, in nearby King George County at Belle Grove Plantation off Route 301. It is right near the bridge that takes you over the Rappahannock bridge into Port Royal.

Return from Colonial Beach, Virginia Facts to the Home page