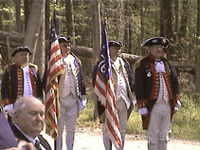 The next James Monroe Birthday celebration will be held on Saturday, April 25, 2020 at 10:30 a.m. at the Birthplace Monument site.


2009 marked the 251st anniversary of our 5th President's birth on 28 April 1758 here in the Colonial Beach area of Westmoreland County.

Inside the visitor center is a framed letter from former President George W. Bush. He had been invited to attend the 250th James Monroe birthday ceremony in 2008, but as far as I know he was unable to attend, so instead he sent a very nice letter.

The ceremony began promptly at 11:00 a.m. We were first treated to the sounds of a local bagpipe organization, who played famous traditional pieces like "Amazing Grace" and "Taps".

This presentation was followed by Sojourners Color Guard dressed in period uniform. They made a terrific presentation about the American flag, all it's elements and what each piece stood for. 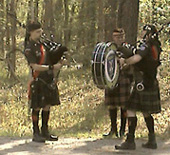 as well as various speeches from local officials, distinguished guests and heads of various historical-related organizations. Some of them are pictured in the photo below.

Former Army Secretary John O. Marsh, Jr. returned for the second year in a row. This year he received the Foundation's James Monroe Medal of Freedom. He is pictured at the bottom left corner of the Color Guard photo above.

A separate, wreath-laying ceremony was held a few days later at Hollywood Cemetery in Richmond, at his tomb. He died on July 4th, 1831 - one of three Presidents to pass away on Independence Day.