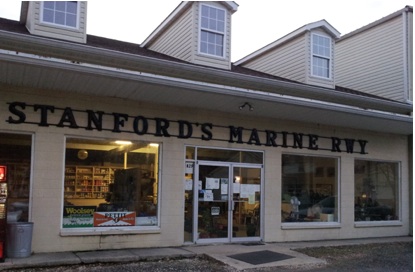 Stanfords Marine Railway (Boathouse Marina as of October 2013) is located on Monroe Bay. Mary Virginia met Colonial Beach been-here Clarence H. Stanford during World War II while he was in Apalachicola, Florida, on a menhaden fishing trip with his dad. She and Clarence returned here to Colonial Beach and built this marine store and boatworks in 1945. Clarence was one of the top boat builders in the mid-Atlantic region.

In 2003, when Hurricane Isabel blew through the area, the winds took off part of a roof and the flood waters came halfway up the shop building. Luckily, there was no serious damage, as all of the electrical equipment had previously been moved up to higher ground. The boat slips and the covered wharf where a beautiful 1920's Elco motor yacht named Hermione, and Pathfinder II - the last boat that Clarence built - both survived. Sadly, the Hermione recently burned down in a fire at a marina in Washington, NC.

Clarence passed in 2006. His hard-working grandson Stephan Williams was known as the manager of the operation until his own passing in 2008 from an injury. Clarence had been Stephan's mentor and greatest friend, teaching him the trades of boat craft and seamanship. Author Sloan Wilson included a description of Stephan in his novel A Talking Boat: The Story of the Yacht Hermione writing "a boy who worked like a man."

Mary Virginia Stanford runs the place. There's an office and the store on the left and a workshop on the right. If she's not in the shop, go across the street to the white house and knock on the door, just like the sign on the shop door instructs you to. This is the Stanford home.

A neat article about the marina appears at http://woodyboater.com/uncategorized/a-barn-find-marina 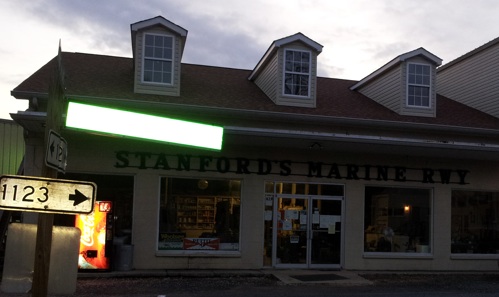