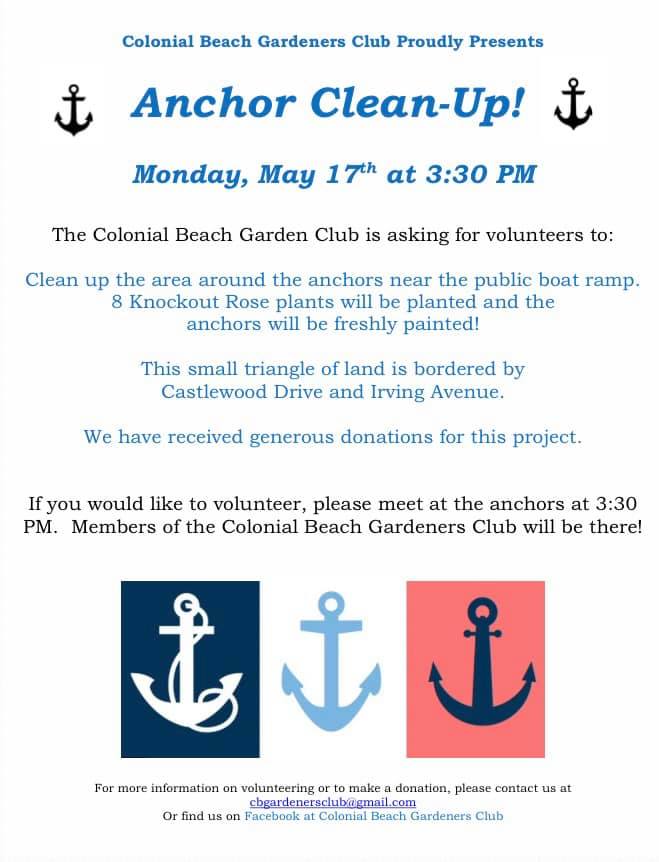 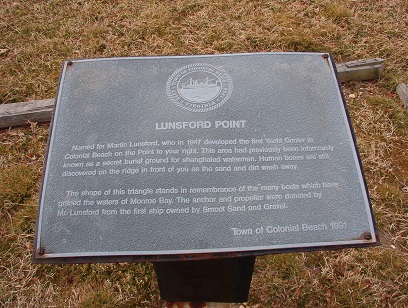 Martin Lunsford was fed up with the monotony of his boring desk job at the FHA in Washington, D.C. so he bought a surplus Higgins WWII landing craft and transformed it into a yacht. On a leave of absence from work in July of 1947, he together with his wife Scottie and young daughter Nancy set sail on a new adventure.

When they stopped for the night in Colonial Beach, they discovered the only places available to dock were Curley's Oyster House on Lafayette Avenue or the Ice House on Monroe Bay Avenue next door to what is now Nightingale's Motel and Marina.

Lunsford resolved to build a marina. He soon resigned from his job, sold the house in Arlington and secured a lease on an abandoned oyster house built in 1932 by William Hopkins at the entrance to Monroe Bay. He converted his yacht back to its work vessel state and worked enough pilings by hand to form 300 feet of dock. The upper floor of the once deserted oyster house was renovated into a 16-bedroom boarding house. Downstairs there were two clubs, one public and one private, and the Colonial Beach Yacht Club was born.

Other elements like additional docks, 200 open and covered slips - some which could accommodate ships up to 50 feet in length - a restaurant and repair space were added on through the years and Lunsford was even awarded the Coast Guard's Bronze Plaque for Auxiliarists when he assisted in saving the life of a local resident who was struggling to survive in the icy waters of the Potomac.

In 1961 he sold the yacht club lease to a group of investors from Washington, D.C. headed by former pro football player for the New York Giants, Tuffy Leemans. The marina had a different name for awhile as well, once being called the Bay Yacht Center. The pub part of the restaurant was named Martin's Pub, after Lunsford. Since then the property has been owned by a number of parties until the Schick family purchased it in December of 1988. They are still the owners. 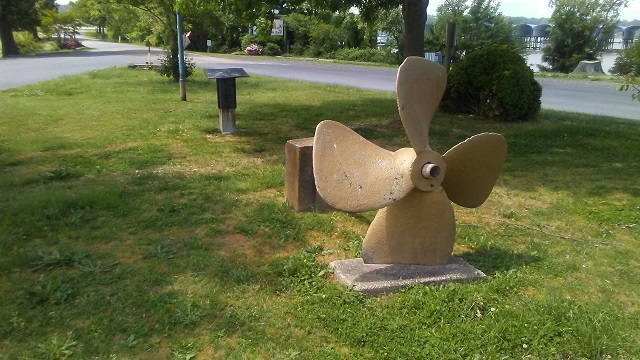 Youth Conservation Corps worked under the direction of Preston Justis and Luther Ingram and Town Manager Bill Bruton. Public Works and private citizens also assisted. The YCC dedicated the project on the point to Martin Lunsford and dubbed it Lunsford Point on September 1, 1989.

The wedge-shaped monument at the entrance to the Yacht Center contains a propeller at one and and an anchor on the other, donated by Lunsford who received the items from Woody Trenary, owner of Smoot Sand and Gravel. The items came from their tugboat Eugenia.  In the center is a mast and flag, donated by the Schick family. The area somewhat resembles a ship.

The marker, pictured above, reads as follows:

"Named for Martin Lunsford, who in 1947 developed the first Yacht Center in Colonial Beach on the point to your right. This area had previously been infamously known as a secret burial ground for shanghaied watermen. Human bones are still discovered on the ridge in front of you as the sand and dirt wash away.

The shape of this triangle stands in remembrance of the many boats which have graced the waters of Monroe Bay. The anchor and propeller were donated by Mr. Lunsford from the first ship owned by Smoot Sand and Gravel.

Return from Lunsford Point to History