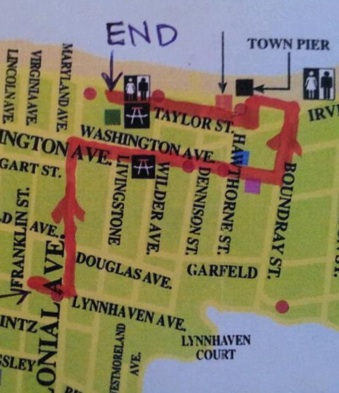 UPDATE 2016: Please note that the parade route will have a slight modification as the end of Hawthorn Street is now blocked off for the construction of a Pedestrian Plaza.

The parade route starts at Jackson Street and Colonial Avenue, near where the 7-11 is located.

The parade route for both the Firemen's Parade (7:30pm the Friday night of the Potomac River Festival and Saturday at noon of the Festival) will start at Colonial and Jackson and head South onto Washington Avenue.

The parade route then crosses Wilder Avenue and proceeds into the Town parking lot, continuing across the parking lot at the Riverboat ending at the Town Stage area on Town Hill.

There will be signs posting "NO PARKING" along the parade route from Friday afternoon until the end of the parade on Saturday afternoon. Officers will be patrolling two hours before the starting times and vehicles will be ticketed and/or towed as necessary.

The parade route will be closed to ALL traffic 15 minutes prior to the starting of each of the parades.

Downtown incoming traffic will be diverted from Colonial Avenue onto Lynnhaven Street at the BB&T Bank building to Dennison Street at the water tower, then onto Garfield Avenue near the Rescue Squad building and finally to Boundary Street at the Colonial Beach Baptist Church.

Please note that the Town Trolley schedule will be temporarily disrupted during the parades.